What Does It Take To Be A Les Clefs d’Or Concierge? 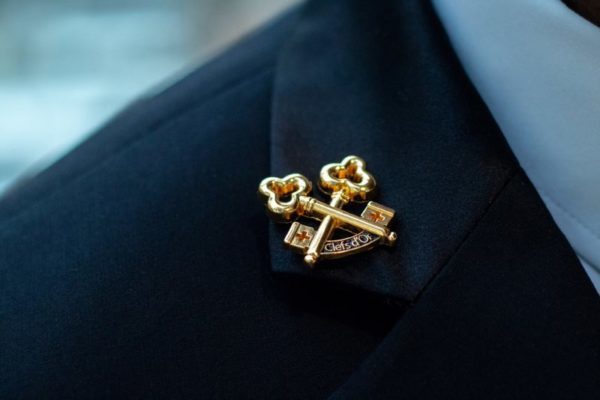 What Does It Take To Be A Les Clefs d’Or Concierge?

Have you ever seen a hotel concierge wearing two crossed golden keys pinned on their lapel? If so, it’s a safe bet you’re in good hands during your stay! Meet the elite concierges who hold “The Golden Keys” and membership to the prestigious hotel concierge society, Les Clefs d’Or.

In the world of hotels this is a big deal, with membership to this concierge society representing the highest accolade in the concierge profession. From directions to suggestions, the “Golden Key” holders withhold the insider knowledge and will go out of their way to make sure you have the best stay possible.

In 2019, our Chief Concierge at Crowne Plaza Auckland, Manish Baungally, was proudly accepted as the 26th member of the New Zealand chapter of the prestigious Hotel Concierge Society, Les Clefs d’Or.

They don’t take just anyone into Les Clefs d’Or. To earn membership, applicants must sit a written exam, supported by numerous references from both past and present employer’s, in addition to letters of support from local tourism operators. A minimum of 5 years consecutive years of experience and a minimum of 2 years employed as a Concierge is required for el Les Clefs d’Or eligibility to apply. There are approximately only 4,000 Les Clefs d’Or members worldwide, working in over 80 countries .

Manish has been with Crowne Plaza Auckland since 2015, starting as a room attendant, before moving to the concierge team and working his way up to Chief Concierge in 2019. Since hearing about Les Clefs d’Or during his studies at Pacific International Hotel Management School he has set sight on his goal in becoming a member of Les Clefs d’Or. Now proudly wearing the Golden Keys on his lapel, this is a huge accomplishment for Manish, opening a door of networking opportunities and personal career development.

What is the best part about being a Concierge?

The best part of my job as a Concierge is meeting so many  people from around the world. On any given day I can meet a person from Europe, Asia, North or South America. I am able to interact with people each with a different story or purpose for visiting the City of Sails.

It is a pleasant challenge when guests come to me with the most unusual of requests.  It pushes me to go out of the comfort zone and look for the best way to fulfil guest request.  As a concierge, we always go the extra mile to make sure guest have the best experience. Guests will always come back to us and express their happiness, shake our hand or give us a hug for a job well done.

What does being a part of Les Clefs d’Or mean to you?

It really means a lot to be part of the Les Clefs d’Or Society.  When a guest sees a concierge with Golden Keys, they know that they can put their trust in us. As a member of Les Clef d’Or all the members meet on a regular basis where we build a network which we can reach out whenever we need to help our guest.

What is one of the surprising/most extreme requests you’ve been asked by a guest?

One of my most extreme request was probably the time when a family of 6 people left their passports in the hotel safe. They were driving to the South Island  on a Friday evening when they reached Queenstown and realised they were missing their passports.  They rang the hotel to confirm if they left their passport behind and said that they are flying back to United States on the Monday.

Unfortunately, the mail service doesn’t operate during the weekends and because it was late afternoon on a Friday it was not possible to courier the item to Queenstown.  I had a trip organised to the south for my wife’s birthday, so I took the passport with me and got it hand delivered to the guest on Sunday in time for their flight.

From Auckland Airport to the Crowne Plaza Auckland
Auckland: City of Colour 6 - 22 May 2022
What's On In Auckland 2022
The Best Experiences in Downtown Auckland
Our In-House Beehive
Crowne Plaza Pledges Towards Sustainable Tourism
Auckland Unlocked
Top 5 Things To Do In Auckland This Autumn
Five Things To Do This Auckland Anniversary Weekend
Welcoming Our New Partner Auckland Seaplanes